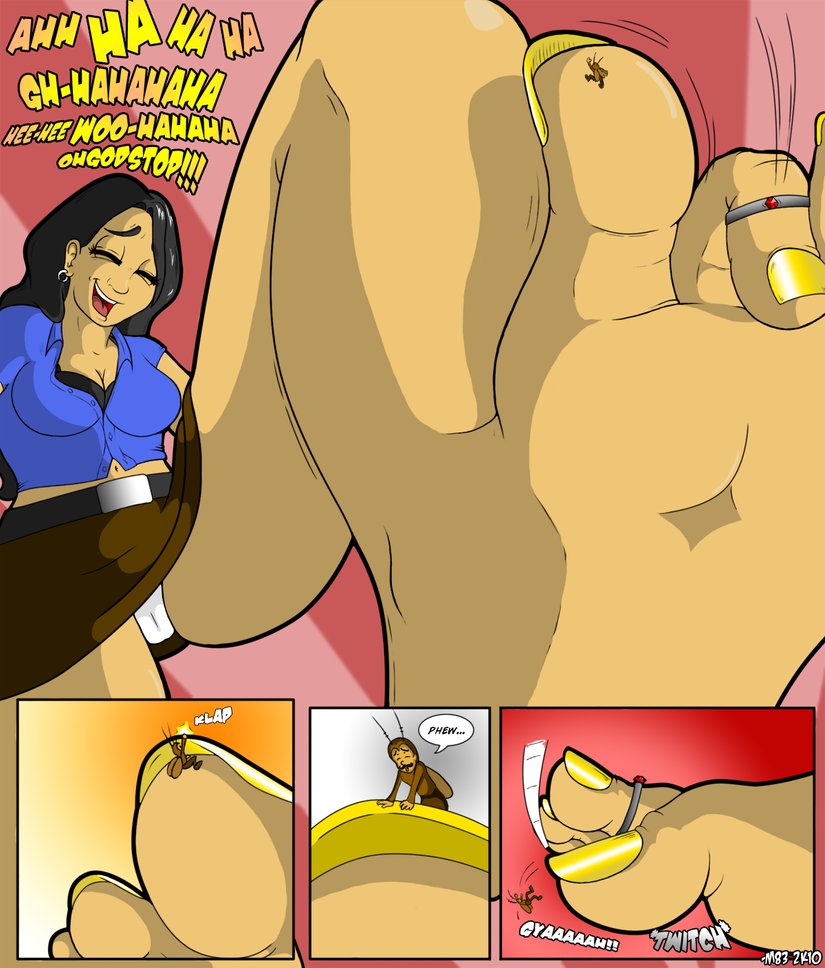 I couldn’t think of a better story than the one the artist wrote, so here it is:

Carlos was in a desperate state… really desperate. He had just lost his job at the dairy plant in Saltillo Mexico and needed a steady income, or better yet, a miracle in order for him to provide food and shelter to his wife and three kids. Carlos was ecstatic to hear of a huge grand prize being awarded on the crazy Spanish variety game show televised all over Mexico called “el arrastre de la cucaracha” or “The Cockroach Crawl” as subtitled to the very small audience tuning in the United States and entered immediately.

The object was simple, put on a ridiculous cockroach costume, climb around on huge movie set furniture and reach the prizes hidden in obscure spots. During the contest, Carlos was kicking major ass being a rock climbing enthusiast he easily scaled the fake furniture and put the other contestants to shame by finding most of the hidden objects in the first three rounds in mere minutes. He proceeded to the final round with a grin on his face stretched ear to ear, he was incredibly close to achieving that miracle he had hoped for so much.

Pumped up and psyched as ever, Carlos was ready for any challenge that may lay ahead of him. But an odd twist of fate had occurred which would normally never transpire on a game show, the final round would have to take place outside of the studio for a surprise course and special guest of honor. This came as a surprise to Carlos, and even all of the “studio audience” as the overused laugh track samples tried to convince the people watching at home.

Outside Carlos met the Special guest the host Jose Cordova spoke of, it was none other than the titanic giantess Amelia Garcia, or “Angel” as most people called her. Carlos’ heart raced and fell into a dizzy spell just by looking at Angel. Especially after Angel shot him the biggest wink he had ever gotten. Whether it was for warm hearted encouragement or cold condescension, only Angel knew. That’s Cordova had informed Carlos that that Angel was not only the special guest, but the final obstacle course too. At that point, Carlos froze completely. Petrified in fear and finally uncertain that he would be able to win the contest and get the big prize.

Cordova informed Carlos that the object of this final round was to claim the shiny ruby that adorned the giantess’ toe ring, firmly secured around her middle toe. It was worth millions of dollars, as it was eight carats… and really fucking big. Even though he now doubted his chances, Carlos refused to give up. The ruby’s red shine of prosperity gave Carlos the motivation he needed. It would provide him a new life, no more working at the shitty dairy plant, he move to a penthouse in California with that kind of money and start a new life. Realizing that, he lusted over the massive ruby, almost as much as he lusted over Angel’s massive breasts and thighs.

Without further hesitation Cordova blew the whistle, and Carlos took off as fast as his legs could take him towards the ruby. He started by jumping on Angel’s big toe. feeling the tickling sensation of a human in a cockroach suit walk on her toes, Angel’s leg shot up in the air taking Carlos on a wild ride nearly 300 feet in the sky. Luckily by some freaky streak of luck he was able to maintain his balance… but not for long. For as soon as he took another step on Angel’s massive toenail, she violently wiggled her toes back and forth, even more violent was the volume of her booming laughter. Carlos was in a state of panic, he held on as tight as he could to Angel’s soft toe flesh, the wiggling of the SUV sized toes proved to be overwhelming to Carlos, in which he eventually lost grip and fell. As luck would have it though he grabbed onto the edge of her toenail as fast as he could and managed to pull himself back on. For a second Carlos felt secure, and in that same second his security was crushed, for Angel twitched her toe and Carlos plummeted to the ground. Luckily he fell into deep mud outside of the studio, which broke his fall, saving his life.

As he struggled to wade out of the mud, Carlos regained his composure, but completely lost his dignity. He was escorted to his car by studio officials with his head sagging in defeat. He could still hear Angel laughing her titanic ass off in the distance, either she was being a bitch, or her feet were really fucking ticklish. Carlos hoped for the latter to be true. To his defense though, Carlos kicked ass at the contest, nearly won, and put his best foot forward, but unfortunately none of that means shit when a giantess just puts her huge foot forward.

Posted in Pictures | Tagged as: illustrator | Leave a comment